Pectinatella Magnifica, or Why the Faculty Lecture Series is Worth Your Time

This past Monday in the Student Union Ballroom, Commonwealth Honors College hosted the second installment of this semester’s Faculty Lecture Series.  Lynn Margulis, a professor in the geoscience department here at UMass, was the speaker, and her talk was about symbiogenesis and the big blobs that grow at Puffer’s Pond in the summer (you can find a more in depth summary of the lecture here).  Definitely intriguing, but, for me, probably not as immediately intriguing as, say, a lecture about the complete works of Jane Austen.

You guessed it: I’m an English major.  I do like science, don’t get me wrong.  I briefly flirted with the idea of spending my tenure at UMass on the northeastern part of campus hanging out in labs, but the allure of Shakespeare was too strong.

Anyway, I did go to the lecture.  I got there early (because I am always worried about being late and, somehow, even in my third year on campus, I don’t have a very accurate conception of how long it takes to walk from one building to another), so I got to watch the ballroom go from a vast sea of empty chairs to a full room of people over a period of about fifteen minutes.  The lecture series is a companion series to the Honors Seminar themed “Ideas that Changed the World.” This class is typically taken by honors college first year students, and a lot of the attendees to the lecture were members of sections of that class.  There were also a lot of faculty members, maybe some other adults from the community, and older students I recognized from past classes I’ve taken.

I’m not going to pretend I understood everything that Professor Margulis talked about in her lecture.  There were a lot of science words that went over my head, and trying to conceptualize something that happened thousands of millions of years ago was beyond me without some extra coffee.  However, I actually really enjoyed the lecture.  Lynn Margulis has a great sense of humor - she joked that she loves being a geoscientist because she never has to apologize for having class outside.  She also broke down a lot of the science terms - symbiogenesis, apparently, is just symbiosis and genesis.  Oh.  That makes sense. 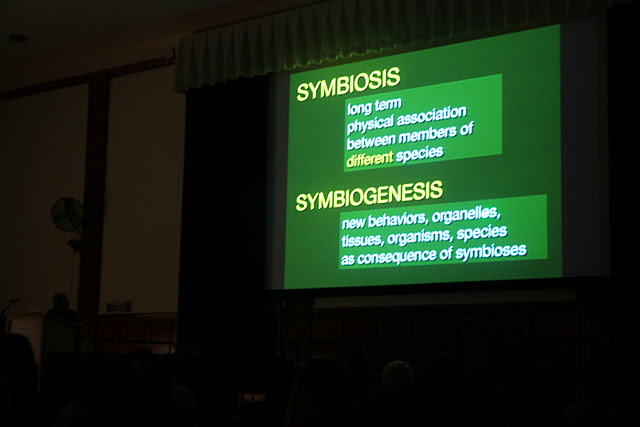 There were also a lot of videos of cells and ant intestines and tentacles, all beautiful colors and geometric shapes - the micro-world, magnified, is incredibly aesthetically beautiful (okay, maybe not the ant intestines.  But definitely the tiny tentacles, swaying beautifully in their watery environment, reaching out tentatively to feed on tiny specks that float by). 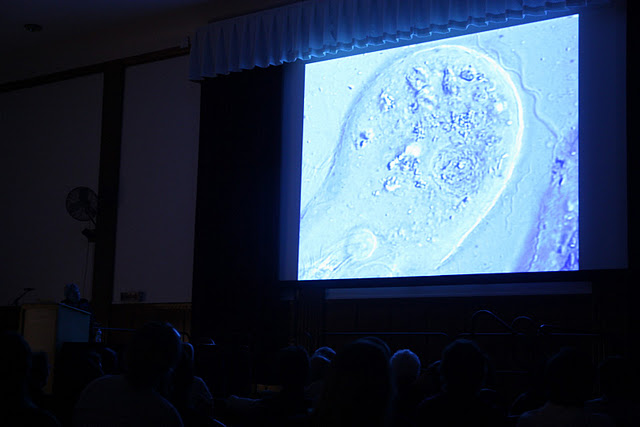 The tentacles, by the way, bring us back to the ultimate topic of the lecture: blobs.  The tentacles belong to the big jelly blobs that grow and live in Puffer's Pond (and other places in New England as well) during particularly warm summers.  These big jelly blobs are animals that are full of bacteria. The bacteria use photosynthesis to convert the energy of the sun into energy that can sustain the blobs (remember, we were talking about symbiosis/symbiogenesis? The blobs house the bacteria, and the bacteria feed the blobs).  They’re big and squishy looking, and their scientific name is pectinatella magnifica, which means magnificent little jelly things.  Um, that’s awesome. 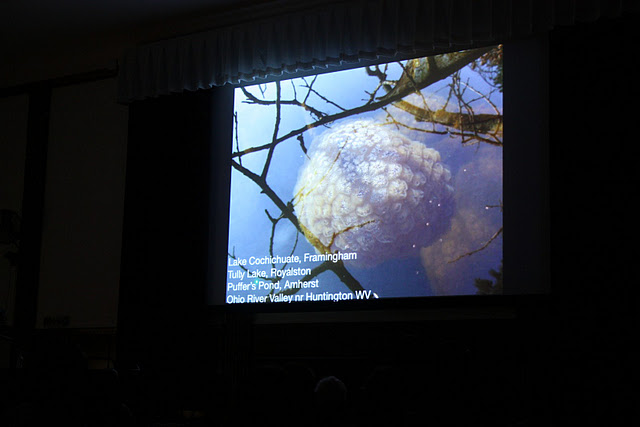 I never would have known about this - which, let’s be honest, doesn’t have many practical applications in my life currently, but which is really interesting and also cool - if I hadn’t stuck around and gone to the lecture.  I also wouldn’t have known about symbiogenesis, which basically proposes that cooperation, instead of competition, drives evolution.  I like that idea, and, according to Lynn Margulis (who I believe), there seems to be a lot of evidence to support it.

I’ve had a similar experience before, and I’m sure that I’ll have it again.  Last semester I went to a lecture about dog psychology.  I learned why you shouldn’t approach a dog with open hands (to dogs, your hands look like mouths with lots of scary teeth), why dogs aren’t long fooled by their reflections (dogs rely on their sense of smell more than their sense of sight), and that beagles are among the least intelligent dogs, but that makes them good pets for children because they are more forgiving.  Earlier this year I went to David Lenson’s lecture “The Great Lie of Ideals: From Plato to General Education” where he said "some pretty nasty things about Plato” and encouraged students to always keep questioning.  Last semester I went to a teach-in about the conflict in Egypt.

What I’m trying to say, I guess, is that I have found that it is always worth it to take the time to attend extra lectures on campus.  I almost never have any idea about what the lectures are about going in, but I’m always interested by the time I leave, and Professor Margulis’ lecture was no exception.

This blog actually inspired me to attend more on-campus lectures. In past semesters I've begrudgingly attended faculty lectures required by courses... and this post reminded me that during the lecture, I was actually fairly interested in what was being said. Thanks for another interesting blog!
I really don't like science but this made blobs sound AWESOME! I'm definitely going to check out some lectures and, of course, KEEP READING! Awesome posts! Bravo!
Great job highlighting the importance of taking advantage of offerings even if they may not initially sound interesting or appealing. You never know where or when you may find value -- and for free! I look forward to more informative posts on campus happenings.
I look forward to reading more!  Please keep taking a lot of pictures for your blog posts! :)
Hello everybody, I would like to thank you for the efforts you have made in writing this article. I am hoping the same best work from you in the future as well. In fact your creative writing abilities has inspired me.
No complaints on this end, spimly a good piece.

©2020 University of Massachusetts Amherst · Site Policies · Accessibility
Pectinatella Magnifica, or Why the Faculty Lecture Series is Worth Your Time | Commonwealth Honors College